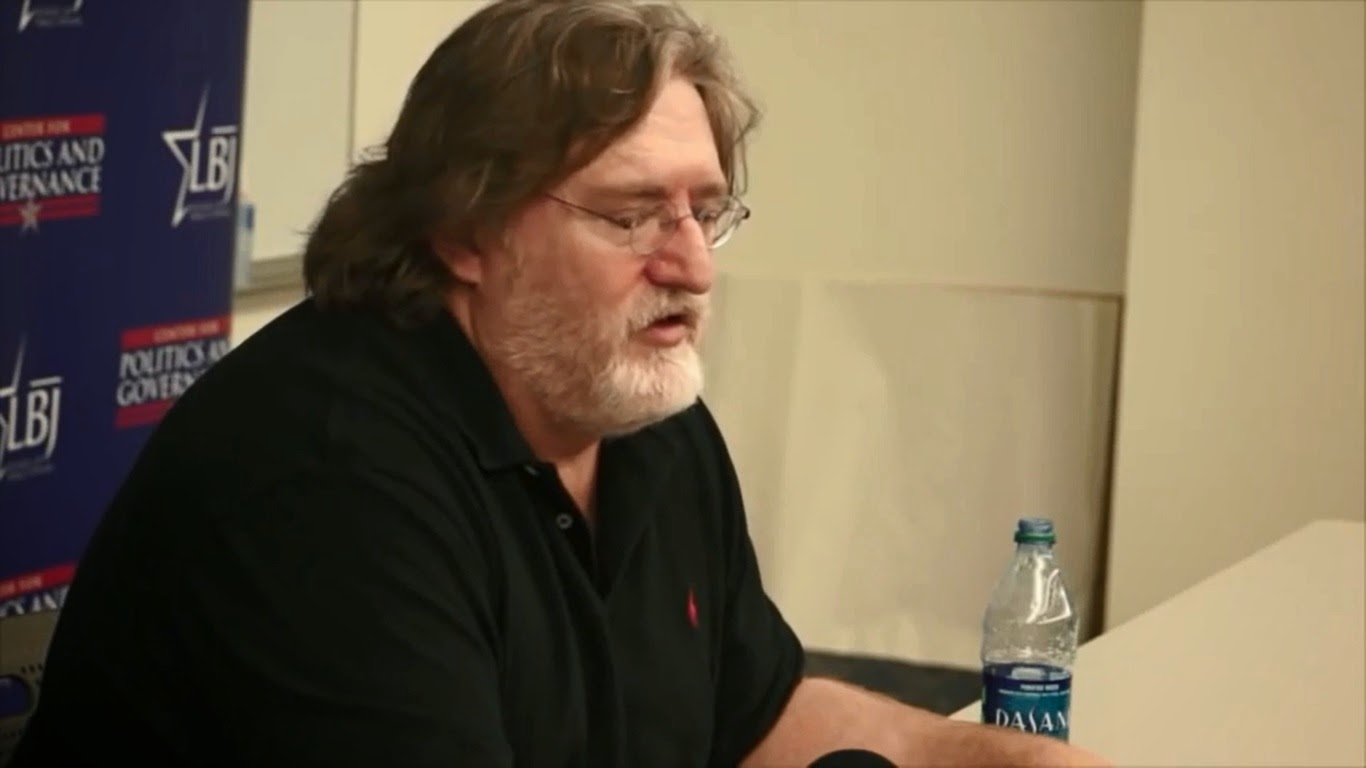 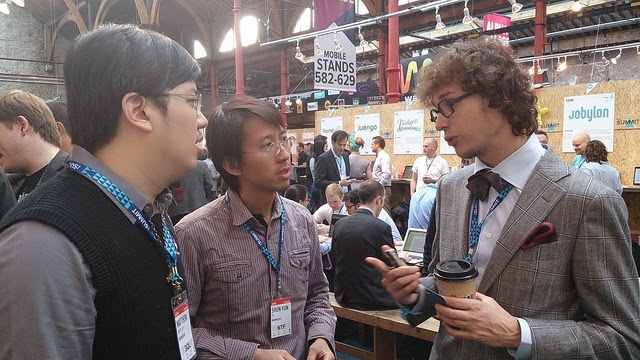 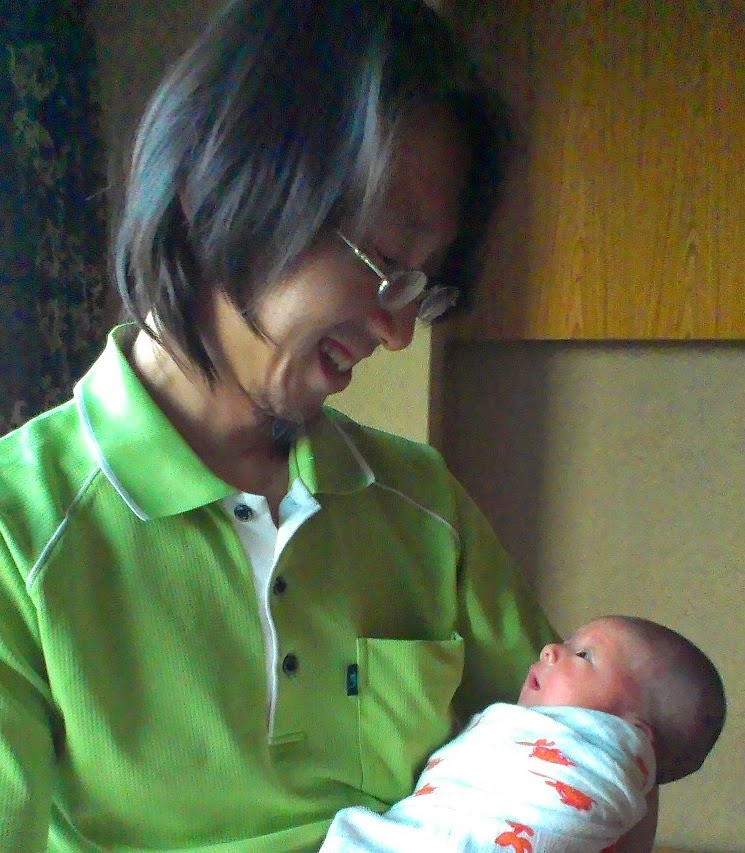 A couple of days ago my wife and I left the post-delivery maternity center to move back home with our second child “lu”. It's now a good time to record some events around his delivery.

Lu was born on 19 March, more than three weeks ago. I was in Singapore at the time, with the plan to attend an academic conference. However, when I woke at 7am that day, I saw a SMS message from my wife, saying that she broke her water at 4am, and was moving to a local hospital.

I got up immediately to think about what next. I knew for sure I wasn't going to make it to the delivery. Although, I wasn't sure if I should get back as soon as possible. On one hand, my presence probably will help; on the other hand, going back means missing both the delivery and the rest of the trip, which may not be of material help to her at all.

While brushing my teeth and weighing on the options, my roommate at the hostel came out to get himself ready as well.

I hadn't a chance to talk with him yet, being busy in the past couple of days myself. The night before, he was also studying some materials, looking serious. I didn't want to disturb him then.

A brief chat revealed that he was in Singapore for a job interview, and happened to work in similar fields. I told him why I was there, adding: “my wife is about to deliver,” so plans might change.

“Why are you still here?” he exclaimed immediately, and explained: “this is the most important thing now, your wife needs you, and you're still here?"

“You'll regrat for the rest of your life, if you don't go back now”. Years later, when I looked back, I will regret for missing out this moment. All other things, however looking important back then, will fade away, he said.

If he were I, he'd cancel all schedule and get on the next available flight.

“It'll cost just a few hundred bucks for a ticket, and it's money you'll recover soon in your next paycheck. Will you let this stand between you and the most important moment in your life so far?”

He also reasoned: usually people go to business trips to either: 1. do works (to earn money) 2. make some social connections. But both are nothing in an event like this. You can always make up for the lost monetary or social costs, but not for the special moment.

I appreciated his advice greatly, and immediately went to change my flight to the earliest possible (mid-night of the same day). As I still had some time, I decided to go to the conference to explain.

I met some friends and were congratulated. They were all very kind and understanding. However, as I forgot to bring an electricity adapter, I was unable to re-charge my laptop to stay in touch.

I asked one lady behind the organizer's desk whether there were any adapters I could borrow. They apologized for not having it. However, she quickly pointed to another laptop from one of the staff that used an adapter. She said it was okay if I used it for a while.

I got to charge my notebook and subsequently got in touch with my wife on time, and learned about Lulu's birth at 14:08.

At around 10pm, I was at the airport ready to check in. However, I was asked by the security to check-in a small gift from a Singaporean friend, given to me just hours earlier. I didn't know what the content was until then: a liquid lotion for babies that unfortunately exceeded the carry-on limit.

I went back to the check-in counter to seek help. As I took a low-fare JetStar airline, any checked luggage costs an additional fee. The choices I faced were to either pay up a non-trivial amount to check in the gift, or leave it as trash and not carrying it onto the plane.

It was an unexpected decision I had to make.

I was already pondering about paying up, as I didn't want to throw away a friend's goodwill. However, while I was calculating how much it would really cost, the lady behind the counter suddenly said: “check your luggage, you don't have to pay.”

Don't have to pay?

“When the airplane is full, we can check additional luggage for free to avoid the flight being crowded” the lady explained, without changing expressions on her face. “But this is only because the airplane is now full.”

I was thanking her in both words and heart, though she still acted very professionally.

On my flight back, I looked back at the various “accidents” that had allowed my return trip to be as smooth as it was, they were all “random acts of kindness.”

Without my roommate's reminder, it might take more time before reaching (hopefully) the same conclusion. Without the organizing lady's intentional help, it might have taken a bit more effort to contact my wife. Without the airline lady's quick wit, I could be facing the dilemma of “how worthy is a friend's gift?”

These were all random acts of kindness, that even the person who bestow them might not have been aware of how much impact it'll make on the person receiving it, given the particular circumstance.

Given my circumstance that day, I'll be forever grateful to these people, as they'll be part of my memories of how I decided to go back early to see my wife and our newborn boy.

This serves as a good reminder for us to be kind. We may never know just when, when a little random act of kindness can mean so much to a stranger.

若知道我過去所做所為，不少人會覺得我是個傻瓜。看完這篇文章後，可能會覺得我還是個瘋子。不過，成功種出有機蘋果的木村秋則說：「這一生，至少當一次傻瓜」。賈伯斯則說過：「改變世界的，是那些瘋狂到自以為可改變世界的人」(the people who are crazy enough to think they can change the world, are the ones who do.)

蘋果創辦人賈伯斯本人，17 歲那年接觸到「若你把每天當做最後一天過，某天終會成真」("If you live each day as if it was your last, someday you'll most certainly be right.") 的概念後，每天即如此生活著。其實死亡一直都離我們很近，也很真實。不論我們如何的不捨及放不下，終有一天當我們無助的、突然的面臨自己的死亡時，仍是必須放下。

希望我們都能提早交棒、提早退休。
Posted by Unknown at 11:35 PM No comments: